It strikes me how still it is as I walk outside so early in the morning,
when I guess most things are still as the world has not quite woken up yet.

There it is on the patio and for a moment it almost takes me aback,
the stillness of it compared to last night.

Last night this ball whizzed through the air at a hundred miles an hour,
or so it seemed at the time!

Accompanied by lots of movement.
Two boys darting around.
Lots of laughter, lots of shrieking,lots of noise.

The sound of that ball being bounced up and down on the concrete drive
and the ear jarring noise it made as it hit the garage door instead
of going in the basket ball net.

It went everywhere.
On the garage roof, over the neighbours fence, on me,a innocent bystander,
who was just watching the mad, frenzied game of late night basketball.

Just a 99p ball from Morrisons but it was worth every penny and more
as I watched my eldest and youngest play together.
The sound of laughter, the boisterous nature of two boys playing together.
Much different to when mum plays a genteel game of
Lets see who gets up to five.

This was fast and furious, noisy and rough.
You had to have your wits about you or you would be hit
on the head by a flying ball at great speed.

Boys,its a long time since I saw you play like that,
you sure made me smile. 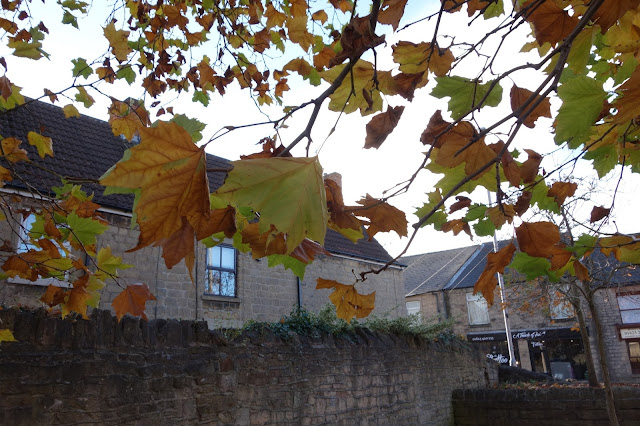 Weekends are busy around here.
We fit in shopping, swimming,walking
and getting everything sorted for the week ahead.
Sharky comes back from uni and works long hours
and then he goes back to uni, usually very tired.

Grandparents pop in on flying visits and we usually see quite
a bit of the older boys and their girlfriends.
It is a nice family time,but very hectic.
Definitely a busy household.

We sit glued to the television watching Strictly
and any sport that might be on and there is always sport on our television.
Every. Single. Day.

This weekend was even more hectic than usual
because it was Bonfire Night.
I did a little bonfire tea and I was proud because I
made real mushy peas, just like the ones my grandma
used to make and after a few moments of thinking that they had
gone very wrong it all turned out ok and they actually tasted like real.
proper mushy peas. I was proper proud. 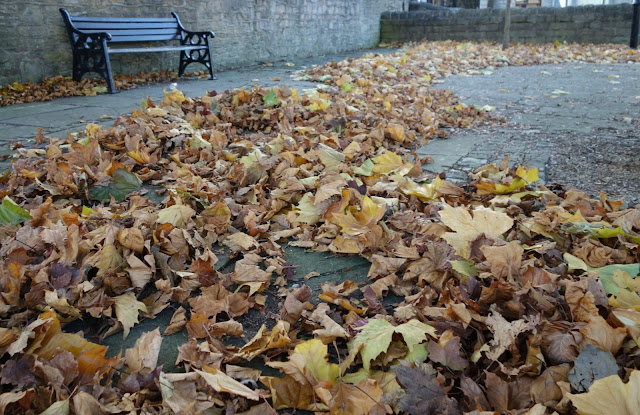 We went to a bonfire party which had so many people there it was unbelievable.
It was said on Facebook that over 4000 people attended it.
I'm not totally sure about that number, yes it was busy,
but I think 4000 people may be a slight overestimation.
It was good to see a big bonfire, it was so bright and very smokey.
We still have some sparklers to do, when we get a moment.

And now its Sunday afternoon and I still have plenty of jobs to do.
I'd better get on and do them! 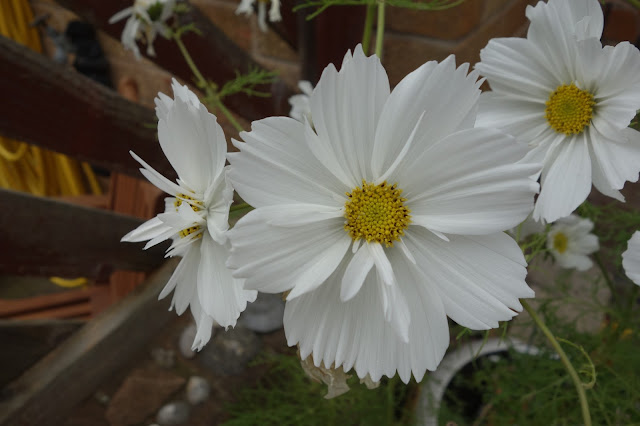 Email ThisBlogThis!Share to TwitterShare to FacebookShare to Pinterest
Drawings Weekend Splashes and Dashes

This Time Of Year.
We have still got the Halloween decorations up.
I have just taken a few down and Chips has yelped.
We didn't have many up this year,just a few bits of pretty tinsel draped around
and a row of skeletons around the arch and this little cat.
He used to live on my desk when I was at home,a long time ago.
I left him up to show my mum and she smiled, he has lasted a long time. 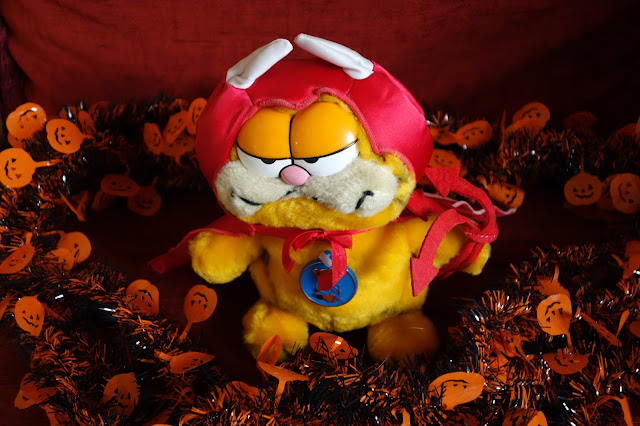 We have got our lovely pumpkins but even they might be on their last legs now
and unless we want to wake up to pumpkin goo all over the kitchen
(this has happened before) they will need to be put outside very soon.

Halloween was fun.
We went on a couple of Halloween Trails.
One at a local country park and the other at the forest.
The clues were really hard for the forest trail but it was a good trail.
The clues were letters hidden like this 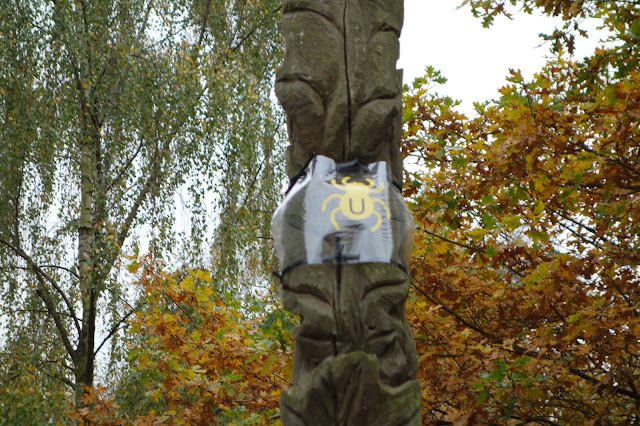 and then you had to spell a word out.
Would it be bad to admit that we couldn't work the word out?
But we did find lots of the other clues,thankfully!

The walk around the forest was lovely.
It was very peaceful although the weather was proper autumnal weather,
as drizzly as anything. 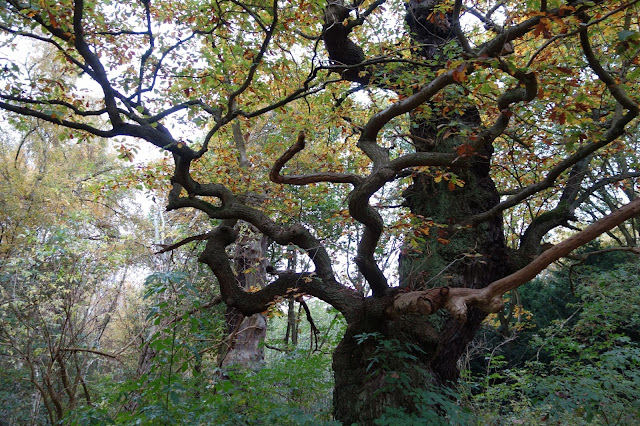 We saw pumpkins dotted all over the place. 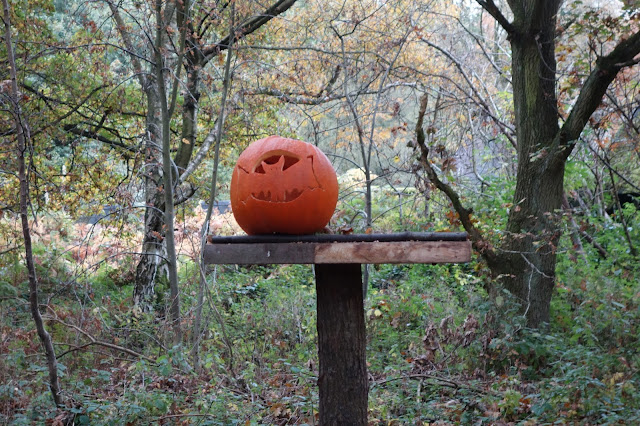 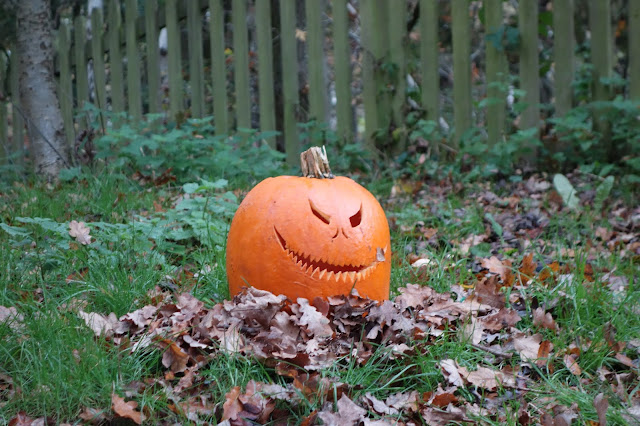 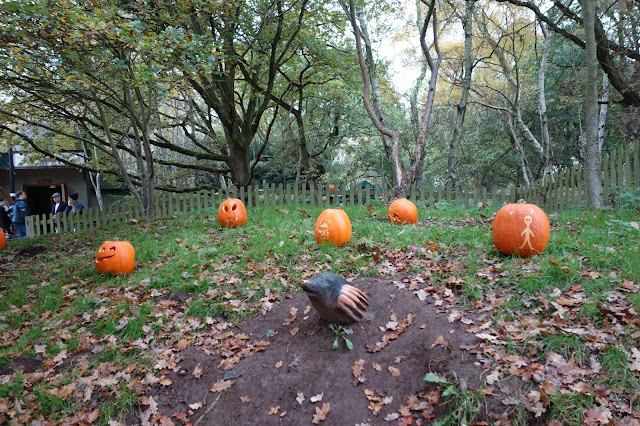 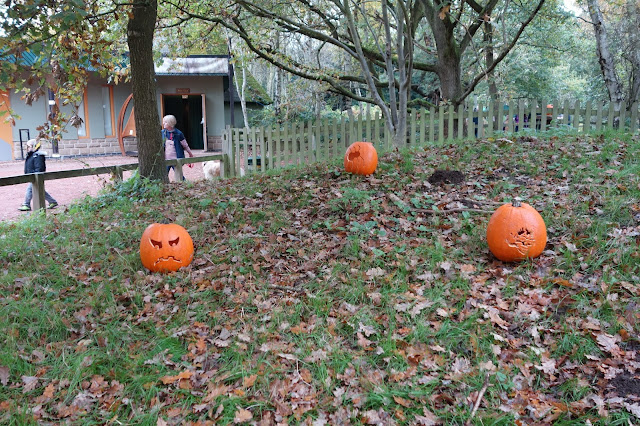 And we saw some friendly wooden creatures too. 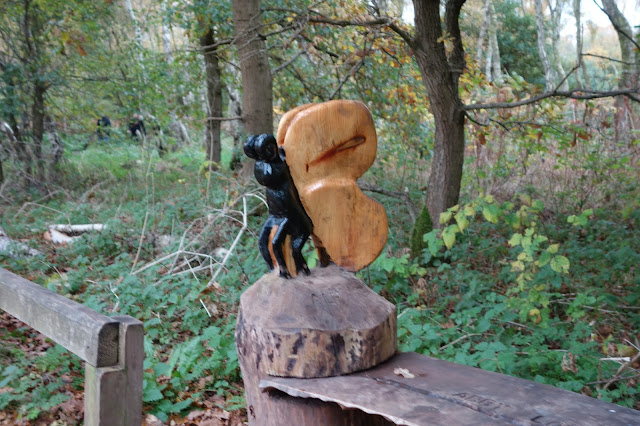 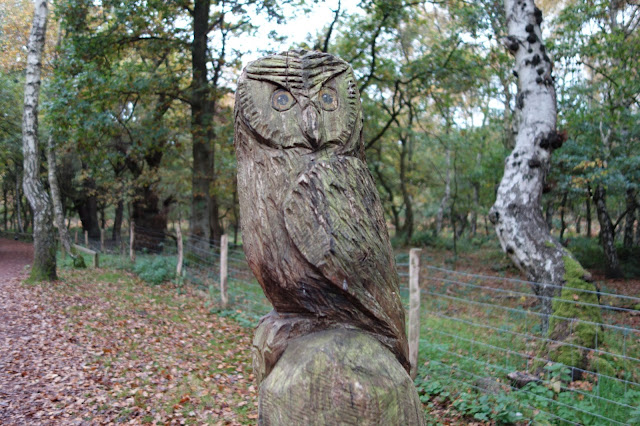 There was food for the birds. 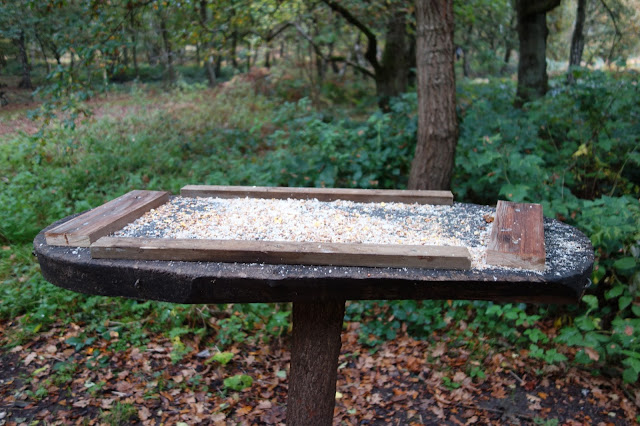 And plenty of very old trees. 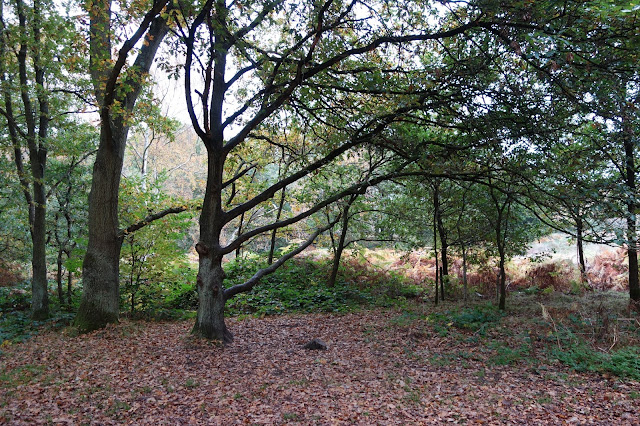 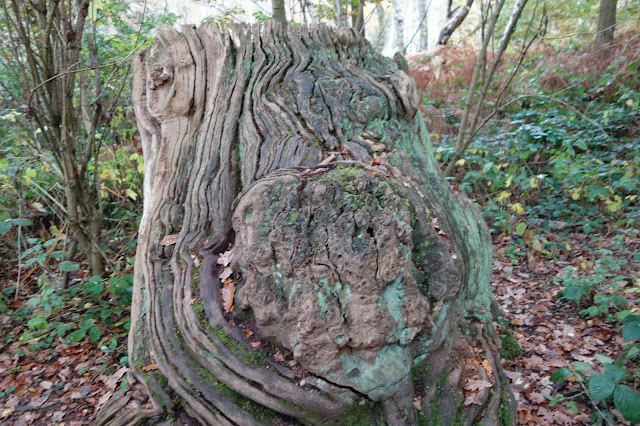 Then on Halloween day we had spooky spiders on toast for tea
and then we went trick or treating with Chips cousins.
It was really enjoyable and quite wow to see how fantastically some people
had decorated their homes.
We had some yummy Halloween food and lots of sweets, which will take us to
Christmas to eat!
We even dared to visit the witch that lives round the corner from us,
she is absolutely brilliant and this year she had a real moving broom. 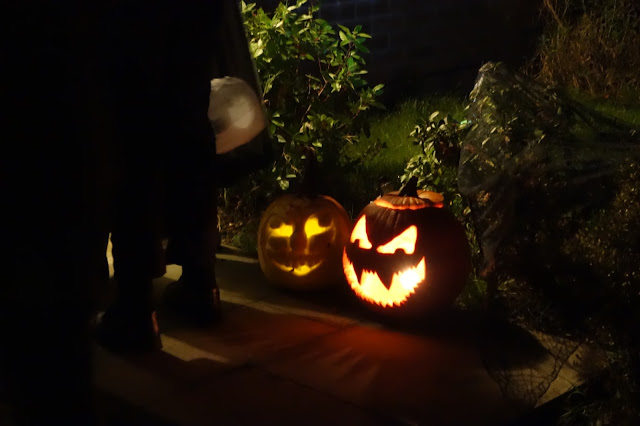 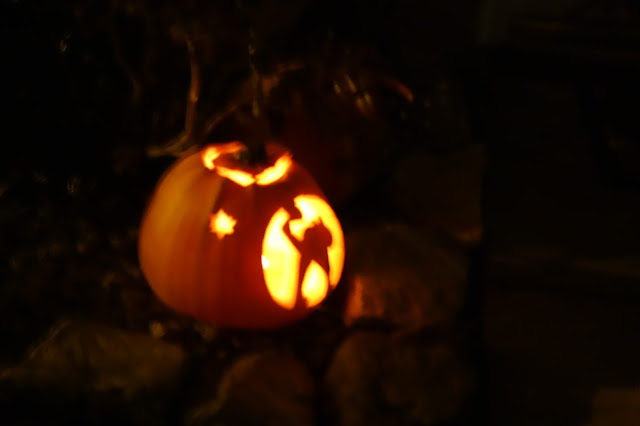 Some of the fabulous pumpkins we saw. 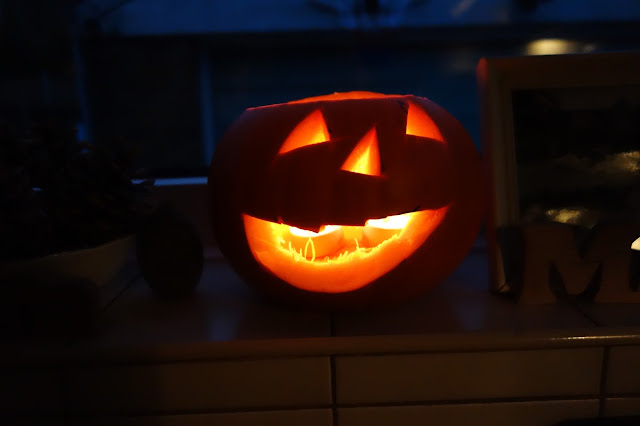 Our very own pumpkin!

At the end of the night we were all shattered but it was a very good Halloween.

Spooky Going Ons.
When you go down to the woods today be sure of a big surprise!
For hidden in this beautiful place 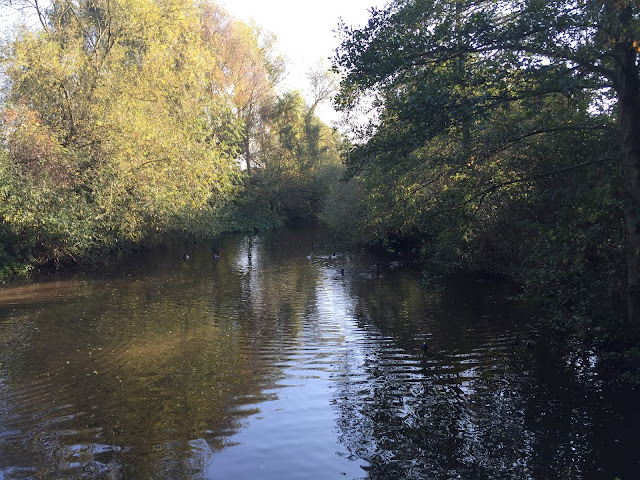 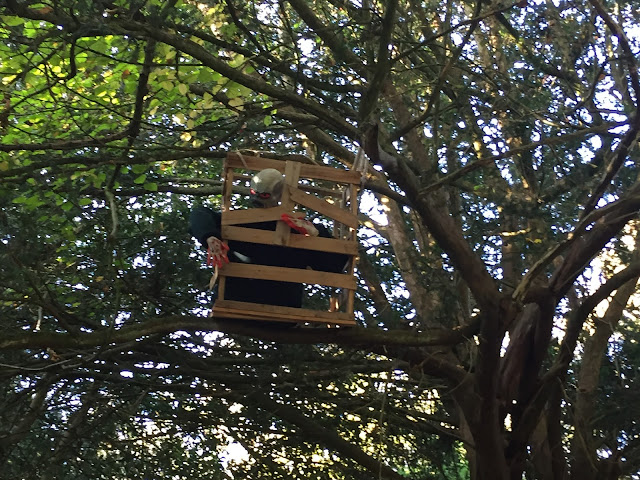 spooks hidden in the trees!

On Tuesday we went on a Halloween trail at a local country park.
And you know what,it was not as easy as peasy!
In fact clue number three had us foxed completely
and we had to go back to find it!

It was good fun though and the park was full of children holding trails,
collecting clues so that they could get a nice bit of spooky chocolate
as their prize! 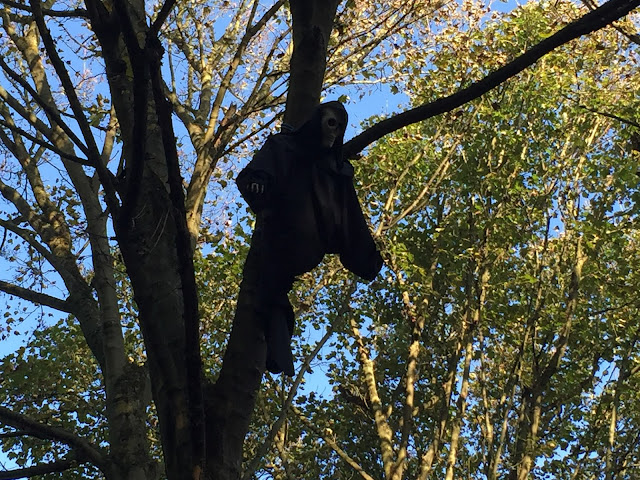 There were nine clues in all and they led us all around the park,
which was quite a walk.

One of my favourite spooks was this one;

A long pointed nose and tall pointed hat,
I fly on my broomstick with my little black cat.
I cast my spells over boil and bubble,
Ready to cause a whole lot of trouble! 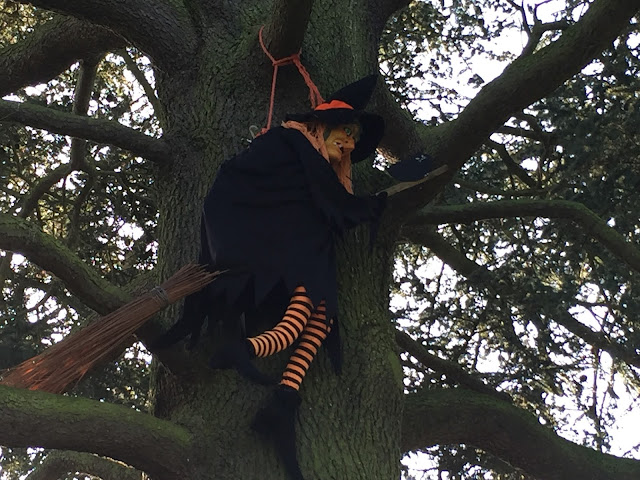 I was a bit upset as my camera battery ran out as soon as we entered the park
but luckily I had a tiny bit of space left on my trusty phone. I need never ending
photo space and a never ending battery too and I bet I'm not the only person
who thinks that!

After we had finished the trail and some lucky person had eaten all
their hard won chocolate we went to feed the ducks.
I would like to say this was peaceful but the poor old ducks were so
under attack from the gulls it was horrible to watch.
The gulls around the park are really vicious, poor little ducks.
It was a nice afternoons walk.

Half Term Up To Yet.

I love half term.
Time to breathe.
Time to be with family.
A chance to slow down,slightly.

We are only on Monday so the exploring hasn't been too in depth
but we have managed some walks,
one by the river and the other in the woods. 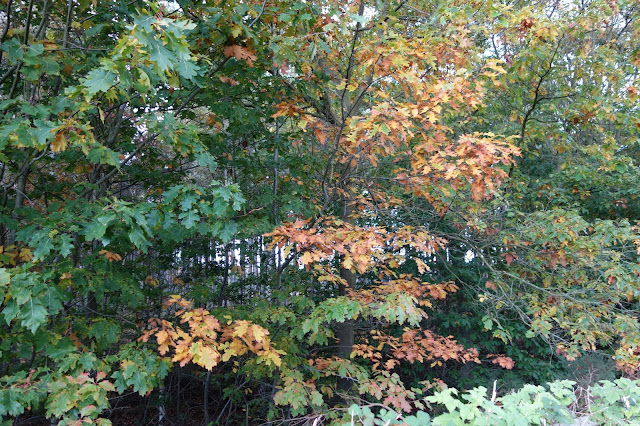 In the woods the leaves were changing colour.
We have not been to these woods for ages.
But the memories were still there.
In abundance.
With everyone having their own little snippet
of what these woods meant to them. 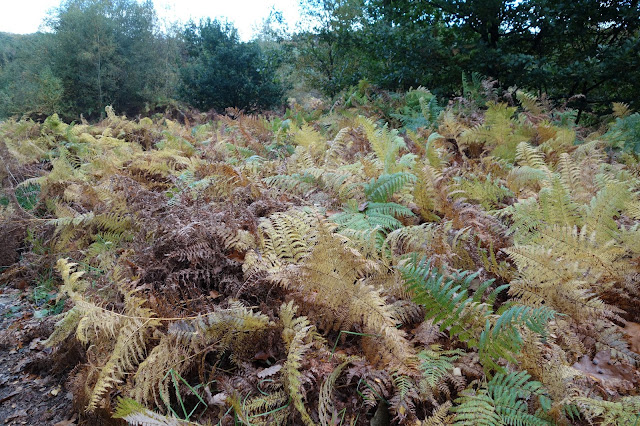 We walked quite a long way.
Up through tons and tons of sand,
until we came to the top of the woods,
which was a prefect place to play with sticks,
as all small boys like to do. 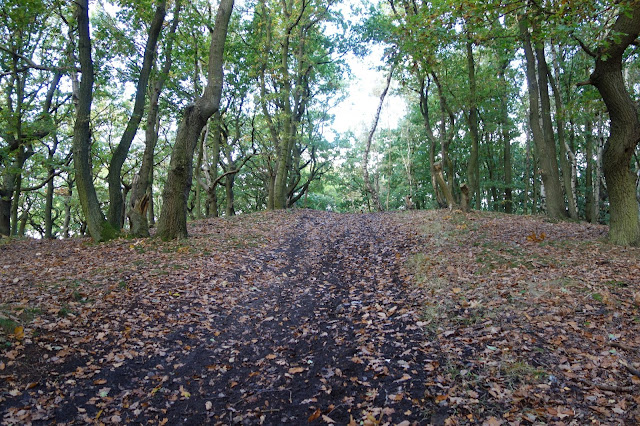 It was a refreshing walk,
through a wood full of memories, nice. 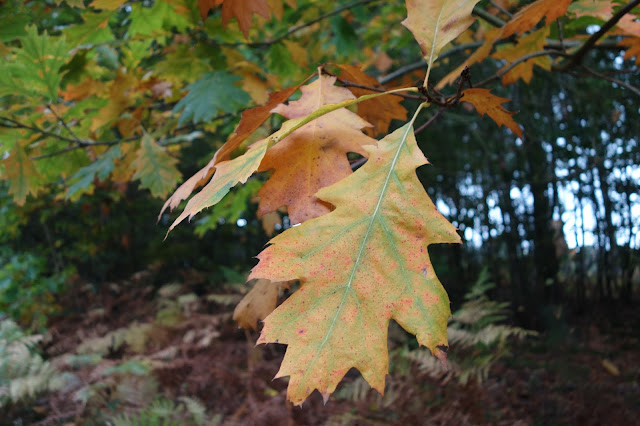 Today we went to the water. 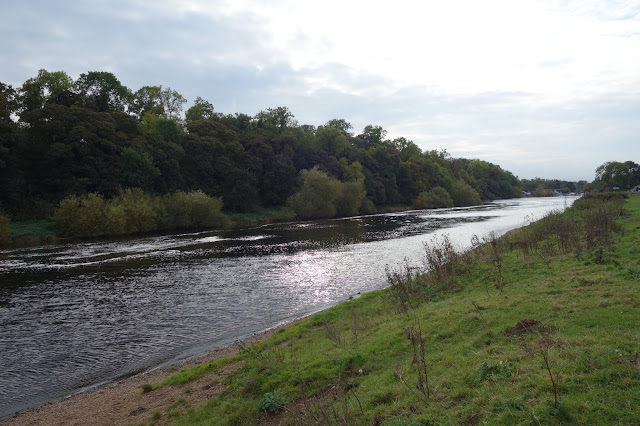 A big river.
which sparkled in the bits of autumn sun that
occasionally peeped through the grey cloudy sky.

Down at the river side were lots of stones
so we played a game of throwing stones in the water
and seeing who could throw the furthest
and what stone made the biggest or strangest splash.
Time old games that never seem to go out of fashion. 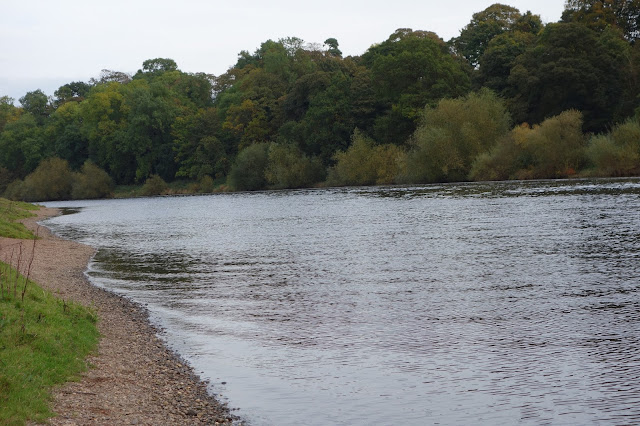 Up on top of the riverbank were lots of cows.
Lovely gentle placid cows.
We spent ages watching them chew grass.
They were very sweet.
Even when they pooed.
Which they did, a lot.
Much to my sons delight! 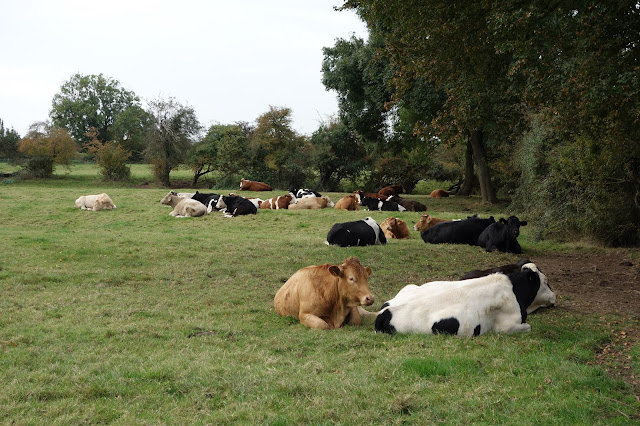 Two nice trips out.
I'm thankful that the weather is dry
and that we are all well enough to enjoy our week off. 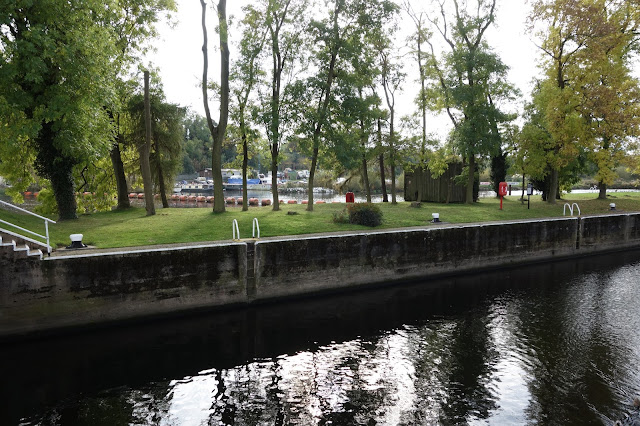 Email ThisBlogThis!Share to TwitterShare to FacebookShare to Pinterest
Drawings Outside Play, School Holidays

1. Wow my laptop is working!Wonders will never cease.

2. Only two more weeks until school breaks up for summer ~ yay.

3. I need to take the England flags down,the footy is nearly over.

4. Saturday night tv is no good at this time of year,bring back Strictly.

6. The school shoes have lasted all year!
7. The tomato plants are thriving but where will I keep them all...

8. I'm almost certain that weekends are going at the speed of light.

9. What will the boys watch now the footy has virtually finished...

10. The swimming pool is becoming our second home.

11. Why do gaming u tube people scream so much?

Elvis and Us
"Did you know that Mamma liked Elvis?" I asked Chips,as I dived to put my coat on in the mad rush that is the eight o'clock getting ready for school and work scene.

Elvis had been on my mind all morning and the tune that was playing through my mind was American Trilogy mixed with If I Can Dream. I'd watched an Elvis documentary the night before and it had really got to me.

Chips turned to me,looked me straight in the eye with an almost exasperated look and answered "Yes,I know Mamma likes Elvis."

I was quite shocked and said "How do you know?"

I had not discussed my mums love of Elvis to Chips and I was really intrigued to find out how he knew.

"She has a Elvis calendar," he replied in a very matter of fact way.

And at this point I smiled.

You see my mum was or should I say is a massive Elvis fan and my childhood involved a lot of Elvis. I know all his songs,probably off by heart,I've seen all his movies and one of my earliest memories is sitting in my grandmas bedroom looking through my mums copies of a little magazine called Elvis Monthly,well I think it was called that,it was a long time ago!

When he died it really hit my mum hard,it was such a shock and our household really felt the impact of it all.

As the years went by it was not so noticeable how much my mum had liked Elvis. If you looked carefully you would see a Elvis picture in a frame and of course the Elvis calendar was always there but my mum did not talk about Elvis really,you are more likely to hear her talk about sport these days and that's what made me stop and smile when Chips had known about my mum and Elvis.

Later that afternoon I told my mum and she really smiled to learn that her grandchild had picked up on her love of Elvis. We chatted about the documentary and marveled at just how Chips had picked up on this fact.

It just goes to show that children are observant and they often know much more than we think!
Posted by Jess at 8:42 AM 16 comments:

Jess
Hello my name is Jess and I'am the mum to three fantastic boys.